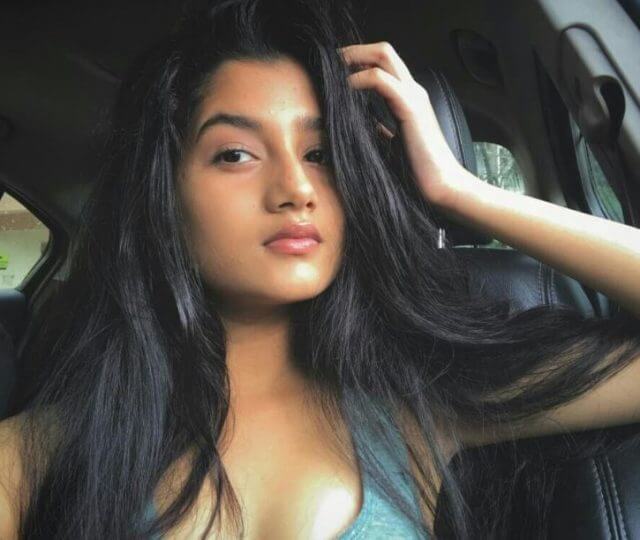 Ashlesha Thakur, also known as Mehek Thakur, is an Indian actress, model, TV personality, and social media influencer based in Mumbai. Ashlesha is well-known across the country for her exceptional acting skills and performances. She made her acting debut in the Colors TV series Shakti Astitva Ke Ehsaas Ki. She also appeared in many television commercials for brands such as Cadbury dairy milk silk, Bournvita, Lifebuoy soap, Amazon, and L&T. She came to popularity after making an appearance in The Family Man Web Series. Ashlesha played the role of Dhriti Tiwari in this immensely popular web series. Ashlesha Thakur has recently emerged as the country’s National Crush.

Ashlesha Thakur also known as ‘Mehek Thakur was born on October 19, 2003, in Mumbai, Maharashtra, India. She was born into a Hindu family. Ashlesha Thakur is currently 18 years old as of 2022. Her zodiac sign is Libra.

Her father’s name is Amit Thakur who is a businessman and her mother’s name is Sunita Thakur, she is a housemaker. She has two older siblings a brother and a sister. Her elder sister Ekta Thakur is also an actress model and choreographer and her brother’s name is Aman Thakur.

According to media reports, Ashlesha Thakur completed her schooling at Mithibai College in Mumbai.

Ashlesha Thakur aka Mehek Thakur has been interested in acting since she was a child. She has been participating in skits and performances since her college days, which paved the way for her to enter Bollywood.

She began her acting career in 2017 with the Colors TV show ‘Shakti Astitva Ke Ehsaas Ki.’ In which she portrayed Young Sindhu Singh.

She made her Bollywood debut in the 2017 film ‘Jeena Isi Ka Naam Hai.’

In 2019, she was cast as Manoj Bajpayee and Priyamani’s daughter ‘Dhriti Tiwari’ in the Amazon Prime web series ‘The Family Man.’

In 2022, she also starred in the Bollywood film ‘Pagglait’. In which she played the character of Tarun’s daughter ‘Aditi.’

She also worked with Girliyapa’s ‘Mom, Dadi Aur Periods’ series on YouTube to raise awareness about menstruation, as well as ‘Indian Moms During Board Exams.’

Ashlesha Thakur has not disclosed any information about her boyfriend and personal life. She doesn’t reveal anything about her love life or dating history.

According to sources, she is single (as of April 2022). Based on her Instagram posts, she enjoys spending time with her family and friends.

Ashlesha Thakur came to fame at a young age, and her popularity in the entertainment industry is something that no one can deny.

Ashlesha Thakur is estimated to have a net worth of INR 1-2 Crore (approx.) she earned this much fortune from her acting career.

Her appearances in films and television shows are the key contributors to her financial success.

Ashlesha is a prominent user of social media. She has accounts on Instagram and Twitter. On Instagram, she has over 299k followers and her social media handle is @ashleshathaakur and shares 6 posts as of April 2022.

She also joined Twitter in October 2020 and has 3,169 followers. She is yet to be verified across the social media platforms.

She also has a YouTube channel, which she joined on Jan 31, 2014. She has currently 11k subscribers and posted more than 50 videos.

Aside from that, she has beautiful long black hair and black eyes, which complement her face and personality very well. She is a beautiful actor and model with an amazingly slim-fit body and her body measurements are 28-26-30 inches.

2. She came to popularity after playing Dhriti in “The Family Man.”

4. She began her career as a model and has appeared in many television commercials, including Himalaya, Kissan, Comfort, and Forest Essentials.

5. She is fluent in English, Marathi, Hindi, and French.

6. She is popular on Instagram under the username of @ashleshathaakur.

9. On her channel, she mostly uploads videos of her commercial ads and interviews.

10. Her hobbies are dancing, listening to music, and traveling.

Who is Ashlesha Thakur?

Ashlesha Thakur aka Mehek Thakur is a model and an actor from India. She has appeared in many television commercials, including Himalaya, Kissan, Comfort, and Bajaj Electricals. In 2017, she made her acting debut in Colors TV’s Shakti Astitva Ke Ehsaas Ki TV serial. In the same year, she made her Bollywood debut with Jeena Isi Ka Naam Hai. Ashlesha came to popularity after making an appearance in The Family Man Web Series. Ashlesha played the role of Dhriti in this immensely popular web series. Ashlesha Thakur has recently emerged as the country’s National Crush.

What is Ashlesha Thakur’s age?

What is The family man Dhriti’s real name?

Who is Ashlesha Thakur’s boyfriend?

There is no information regarding Ashlesha Thakur’s boyfriend. The 18-year-old has not announced or been seen with a guy she claims to be her boyfriend.